The City of South Lebanon

The City of South Lebanon has prepared the following report to provide information to you, the consumer, on the quality of our drinking water. Included
within this report is general health information, water quality test results, how to participate in decisions concerning your drinking water and water
system contacts.

In 2021 The City of South Lebanon had an unconditioned license to operate our water system.

The City of South Lebanon receives 100% of our drinking water from Greater Cincinnati Water Works.

Sources of Your Drinking Water

The sources of drinking water (both tap water and bottled water) include rivers, lakes, streams, ponds, reservoirs, springs, and wells. As water travels
over the surface of the land or through the ground, it dissolves naturally occurring minerals and, in some cases, radioactive material, and can pick up
substances resulting from the presence of animals or from human activity. As with all surface waters, the Ohio Environmental Protection Administration
(OEPA) has classified the Ohio River as highly susceptible to potential contamination. OEPA has also classified our portion of the Great Miami Buried
Valley Aquifer as highly susceptible to contamination due to lack of an overlaying protective clay layer, the presence of low levels of nitrate in the
groundwater, and the presence of nearby potential contaminant sources.

Contaminants that may be present in source water include:

– Microbial contaminants, such as viruses and bacteria, which may come from sewage treatment plants, septic systems, agricultural livestock operations
and wildlife;

– Inorganic contaminants, such as salts and metals, which can be naturally-occurring or result from urban storm water runoff, industrial or domestic
wastewater discharges, oil and gas production, mining, or farming;

– Pesticides and herbicides, which may come from a variety of sources such as agriculture, urban storm water runoff, and residential uses;

– Organic chemical contaminants, including synthetic and volatile organic chemicals, which are by-products of industrial processes and petroleum
production, and can also come from gas stations, urban storm water runoff, and septic systems;

– Radioactive contaminants, which can be naturally-occurring or be the result of oil and gas production and mining activities.

In order to ensure that tap water is safe to drink, United States EPA prescribes regulations which limit the amount of certain contaminants in water
provided by public water systems. The Food and Drug Administration (FDA) regulations establish limits for contaminants in bottled water which must
provide the same protection for public health.

Drinking water, including bottled water, may reasonably be expected to contain at least small amounts of some contaminants. The presence of
contaminants does not necessarily indicate that water poses a health risk. More information about contaminants and potential health effects can be
obtained by calling the Federal Environmental Protection Agency’s (EPA) Safe Drinking Water Hotline (1-800-426-4791).

Who needs to take special precautions?

Some people may be more vulnerable to contaminants in drinking water than the general population. Immuno-compromised persons, such as persons
with cancer undergoing chemotherapy, persons who have undergone organ transplants, people with HIV/AIDS or other immune system disorders, some
elderly, and infants can be particularly at risk from infection. These people should seek advice about drinking water from their health care providers.
EPA/CDC guidelines on appropriate means to lessen the risk of infection by Cryptosporidium and other microbial contaminants are available from the
Safe Drinking Water Hotline (1-800-426-4791).

About your drinking water.

OEPA requires regular sampling to ensure drinking water safety. The Village of South Lebanon conducted sampling for Total Coliform, Trihalomethanes,
Haloacetic Acids, Lead, Copper and Chlorine during 2021. Samples were collected for a total of 6 different contaminants most of which were not
detected in the City of South Lebanon water supply. OEPA requires us to monitor for some contaminants less than once per year because the concentrations of these contaminants do not change frequently. Some of our data, though accurate, are more than one year old.

Listed below is information on those contaminants that were found in the City of South Lebanon drinking water. 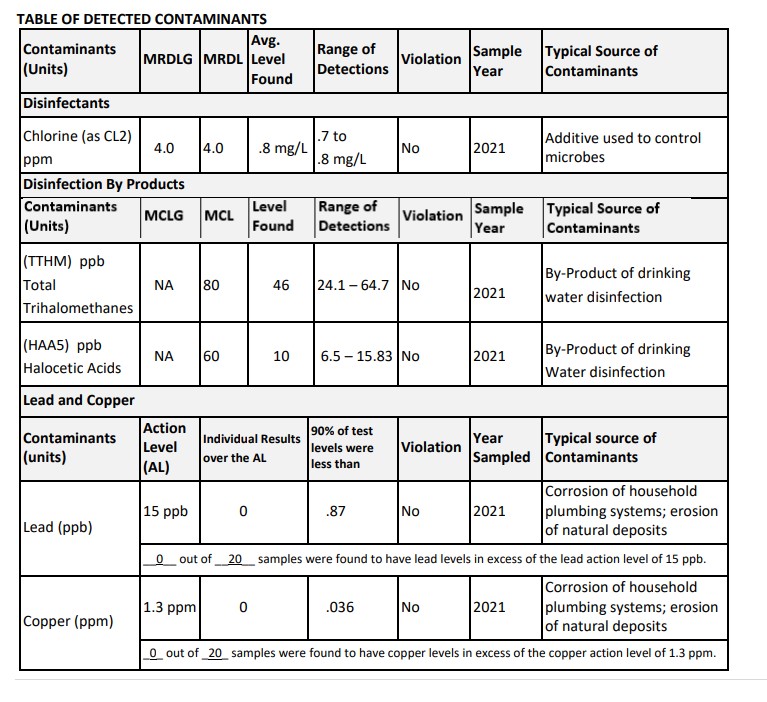 Substances subject to a Maximum Contaminant Level (MCL), Action Level (AL), or Treatment Technique (TT). These standards protect drinking water by
limiting the amount of certain substances that adversely affect public health and are known or anticipated to occur in public water systems.
The City of South Lebanon also has an Emergency connection with the Warren County Water and Sewer Department. During 2021, we used zero (0)
gallons from this connection over 365 days. On average, this connection is used for approximately zero (0) days each year. This report does not contain
information on the water quality received from the Warren County Water and Sewer Department. A copy of their consumer confidence report can be
obtained by clicking the following link: https://www.co.warren.oh.us/water/WaterConditions/water_quality_reports.pdf (Replace with 2021 file when
released)or by contacting Warren County Water and Sewer Department at 513-695-1377.

Turbidity is a measure of the cloudiness of water and is an indication of the effectiveness of our filtration system. The turbidity limit set by the EPA is 0.3
NTU in 95% of the samples analyzed each month and shall not exceed 1 NTU at any time. As reported above, the Greater Cincinnati Water Works highest
recorded turbidity result for 2020 was 0.19 NTU and lowest monthly percentage of samples meeting the turbidity limits was 100%.

If present, elevated levels of lead can cause serious health problems, especially for pregnant women and young children. Lead in drinking water is
primarily from materials and components associated with service lines and home plumbing. The City of South Lebanon is responsible for providing high
quality drinking water but cannot control the variety of materials used in plumbing components. When your water has been sitting for several hours,
you can minimize the potential for lead exposure by flushing your tap for 30 seconds to 2 minutes before using water for drinking or cooking. If you are
concerned about lead in your water, you may wish to have your water tested. Information on lead in drinking water, testing methods, and steps you can
take to minimize exposure is available from the Safe Drinking Water Hotline at 800-426-4791 or at http://www.epa.gov/safewater/lead.

Infants and young children are typically more vulnerable to lead in drinking water than the general population. It is possible that lead levels at your
home may be higher than at other homes in the community as a result of materials used in your home’s plumbing. If you are concerned about elevated
lead levels in your home’s water, you may wish to have your water tested and flush your tap for 30 seconds to 2 minutes before using tap water.
Additional information is available from the Safe Drinking Water Hotline (1-800-426-4791).

How do I participate in decisions concerning my drinking water?

Public participation and comment are encouraged at regular meetings of The City of South Lebanon which meets every 1st and 3rd Thursday of each
month. For more information on your drinking water contact Mike Panno at 513-494-2296.

Please share this information with all the other people who drink this water, especially those who may not have received this notice directly (for
example, people in apartments, nursing homes, schools, and businesses). You can do this by posting this notice in a public place or distributing copies by
hand or mail.